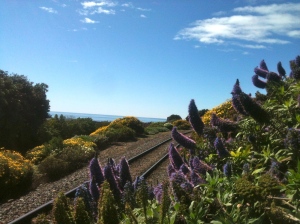 Great journeys are often defined by the nature of their infrastructure: think of US Route 66, the Nullabor Crossing, the Trans-Siberian Railway or the Great Wall of China. But there are smaller journeys – without the badge – that nourish the soul. Little trips with minimal fuss where people are as important as the view.

The coastal road from Ulverstone to Penguin on Tasmania’s Central Coast is one of those that starts and ends with bookend towns where thoughts exchanged across a counter can give a slant on life that comforts or enriches – a gift from a stranger who wants to send you on your way with a cheerful thought. You won’t find this nourishment by taking the highway.

The dual carriageway from east to west speeds traffic away from the scenic route – how many of Australia’s coastal country towns could say the same? What’s missed is precious: facts you might read in local history books and certain offbeat tourist brochures. For example, that the foreshore rocks form part of the Penguin Geological Monument and are recognised by the Geological Society of Australia; that a silver mine once operated here; and that the fairy penguins that Penguin takes its name from can be spotted at sunset at the Lillico Beach Conservation Area (carpark for 20 spaces provided, as well as a guide, in summer).

But the 12 kilometres of road that wind around this mineral foreshore has other attributes: a strip of railway laid in 1901 that hugs the beach and parallels the road where daisy-filled gardens are mysteriously maintained on land, owned by whom? Ask a local and they will tell you the flowering shrubs are maintained by volunteers because it’s always been that way. The gardens seem to spill outside of householder’s private front fences, onto the nature strip and across the road to the other side, where white sands and rocky outcrops greet whatever succeeds in surviving the separation by tarmac.

And on the other side, away from the beaches, look up into the most verdant paddocks Tasmania has to offer – chocolate fields, broccoli, carrot and cabbage pastures, with infinity horizons broken only by tractors. You will find your own places to stop and be, or just potter under the speed limit knowing that the people who need to speed will have known not to take this route.

The added joy of the scenic route from Ulverstone to Penguin is its inhabitants – if the route were a pearl necklace, the people are its pearls, and not just any old pearl. There’s a certain type of woman doing quite well, thank you, they’re mums (single and otherwise) who run their own funky, niche businesses so they can bring up their children in a relaxed place and run their own lives.

At Dragonfly in Ulverstone, Jill may greet you from among the cornucopia of gifts and homewares, with Katie Perry-style hot pink hair. We’ve never met before, but it doesn’t stop her from sharing this thought: “You’ve gotta have fun! There’s no point in living if you can’t get away with dyeing your hair pink!” I decide on an old fashioned knitted tea cosy, and Jill explains that they’re made by her mum using old knitting patterns, and that, just lately, she hasn’t been able to keep up with the demand.

Just down the road at The Blue Barn collectables store, Valerie tissue-wraps a pair of cream Wedgewood teacups I spotted amongst her wonderful collection of antiques. As she does this, she tells me how she came to be here in Ulverstone, after escaping “a dreadful life experience”. Now, two years on, she couldn’t be happier and she tells all her customers if something goes bad in your life, it means something good is about to happen.

“We’re on Tassie time,” says Penelope, who moved from the Blue Mountains where she sold produce to gourmet food stores, and now heads up Produce to the People, a community project which gathers excess produce from backyard gardens in Tassie’s northwest, redistributing it to people who need it. In her trips collecting produce from drop off points along the coast, Penelope sees what she describes as “the comraderie of awesome women”. “Often they’re single mums feeding from the energy they are creating for themselves,” says Penelope, “and that particular energy is passion.”

One of her drop off points is Renaessance Café and Gallery in the main street of Penguin, opened a year ago by Tania, a former hairdresser.  “I’ve always wanted a little boutique café,” she explains, “and nothing too big, so that I could run it myself. I walked past this shop window one day – I think it had been empty for years – and could visualize it here: a hole in the wall café with a view of the sea. I’d just finished my business diploma and thought: This is it. Here I go!” A year on, and people drive for miles for her locally made salt and caramel slices.

If you want, you can stretch your journey further along the coast, and it’s especially good to do when the tulips are in bloom at Table Cape near Wynyard, where Lisa Walker is celebrating her third year at Bruce’s Café and her philosophy of ‘grow it, cook it, eat it’. The former actor and drama teacher says she put herself through five years of university by working as a waiter in cafes. “It was those sideline skills that I’m now using for a livelihood I love,” she says. “I had a list of things I wanted to do, like move to the coast, and run my own business. It doesn’t matter if it’s a success or not because I’ve achieved my ‘I wonder if…’ Now, I no longer have to wonder.”

I like to think of summer berries as the jewels of a garden: the blueberry is like a purple pearl, harvested in clusters; redcurrants catch and filter the light like rubies; raspberries are like magnificent garnets. And strawberries? They are the diamonds of summer. If you follow the seasons, the strawberry arrives first, although you would never know this simply by shopping the supermarket aisles. The weight of a winter’s harvest – sturdy swedes, cumbersome pumpkin and the inevitable potato – give way to lighter treasures that go with lying in long grass, cloud watching, picnics and summer towels billowing like sails on a verandah.

Instead of a job for itinerants, picking fruit should be on the school curriculum. It is another one of life’s simple pleasures: to pass the day in the angle of the sun’s rays; to learn when nature’s gems are ripe for picking; and to know that tasting fruit as it naturally tastes cannot be replicated by science.

Those two wild strawberry plants I bought from Salamanca Market in Hobart four years ago are now 50, self-seeded without much care from me. Their delicate white flowers are as pretty as their fruit and it is all I can do to stop myself from cutting off a few stems before they turn into berries. Now that the strawberry farm is open again in Hillwood,  I’ll fossick with the families on bended knee for my daily platter. Then, when the wild blackberries come into their own, I know I’ll be one of the foragers staking out their bush on the roadside, worthy of at least a bucket at the end of an idle hour.